Access real-time blockchain and cryptocurrency news updates from around the globe.

Despite the recent negative crypto and macroeconomic newsflow, the total cryptocurrency market capitalization broke above $1 trillion on Jan. 21. An encouraging sign is that derivatives metrics are not showing increased demand from bearish traders at the moment.

One area of concern is Genesis Capital's largest debtor is Digital Currency Group (DCG), which happens to be its parent company. Consequently, Grayscale funds management could be at risk, so investors are unsure if the Grayscale Bitcoin Trust (GBTC) assets could face liquidation. The investment vehicle currently holds over $14 billion worth of Bitcoin positions for its holders.

A United States appeals court is set to hear the arguments relating to Grayscale Investment's lawsuit against the Securities and Exchange Commission (SEC) on March 8. The fund manager questioned the SEC's decision to deny their asset-backed exchange-traded fund (ETF) launch.

5 reasons why the Aptos (APT) rally could still have wings

Aptos’ APT reached a new all-time high of $20.39 after posting gains exceeding 400% since the start of 2023. While the rally could just be a pump-and-dump event due to the perception of weak fundamentals, increasing negative sentiment toward the token will likely fuel the prices in the short term.

Let’s explore some of the factors that could be propelling the Aptos price rally.

Aptos is a byproduct of Facebook’s attempt with the Libra blockchain, which regulators forcibly shut down. Two of Libra’s leadership team members, Mo Shaikh and Avery Ching, later found Aptos, a decentralized version of the abandoned blockchain project.

The project is based on the Move programming language and introduces a new class of layer-1 blockchains that will compete against the likes of Solana and Cardano. The primary reasons behind the tailwinds for the APT token include investors’ hope for a technological breakthrough that could finally provide a scalable, secure, decentralized blockchain.

Aptos raised $350 million in 2022, which included a $200 million seed round led by Andreessen Horowitz and a $150 million Series A funding round led by FTX Ventures and Jump Crypto. Later, Binance made a follow-on strategic investment to help boost the Aptos ecosystem.

TradFi and DeFi come together at Davos 2023: Finance Redefined

Decentralized finance meets its traditional counterpart at Davos, with a growing cross-pollination between the two.

Bitcoin (BTC) has “well-formed” evidence, which suggests that its next all-time high will top out at $200,000, one analyst says.

In a tweet on Jan. 27, popular Twitter commentator Trader Tardigrade, also known as Alan, also revealed $70,000 as the next potential bear market bottom.

For many, BTC price action is still bound by Bitcoin’s four-year halving cycles. The resulting price pattern offers one “all time high year” in every four, with 2025 next in line.

Bitcoin’s block subsidy halving will occur a year prior, and from then on, Alan argues, the path will be open to a giant $200,000.

That price tag came about from an analysis of Bitcoin’s stochastic oscillator, which syncs with cycle highs and lows in BTC/USD. Currently, the indicator is printing its latest trough, and if history is a guide, price behavior will do likewise. 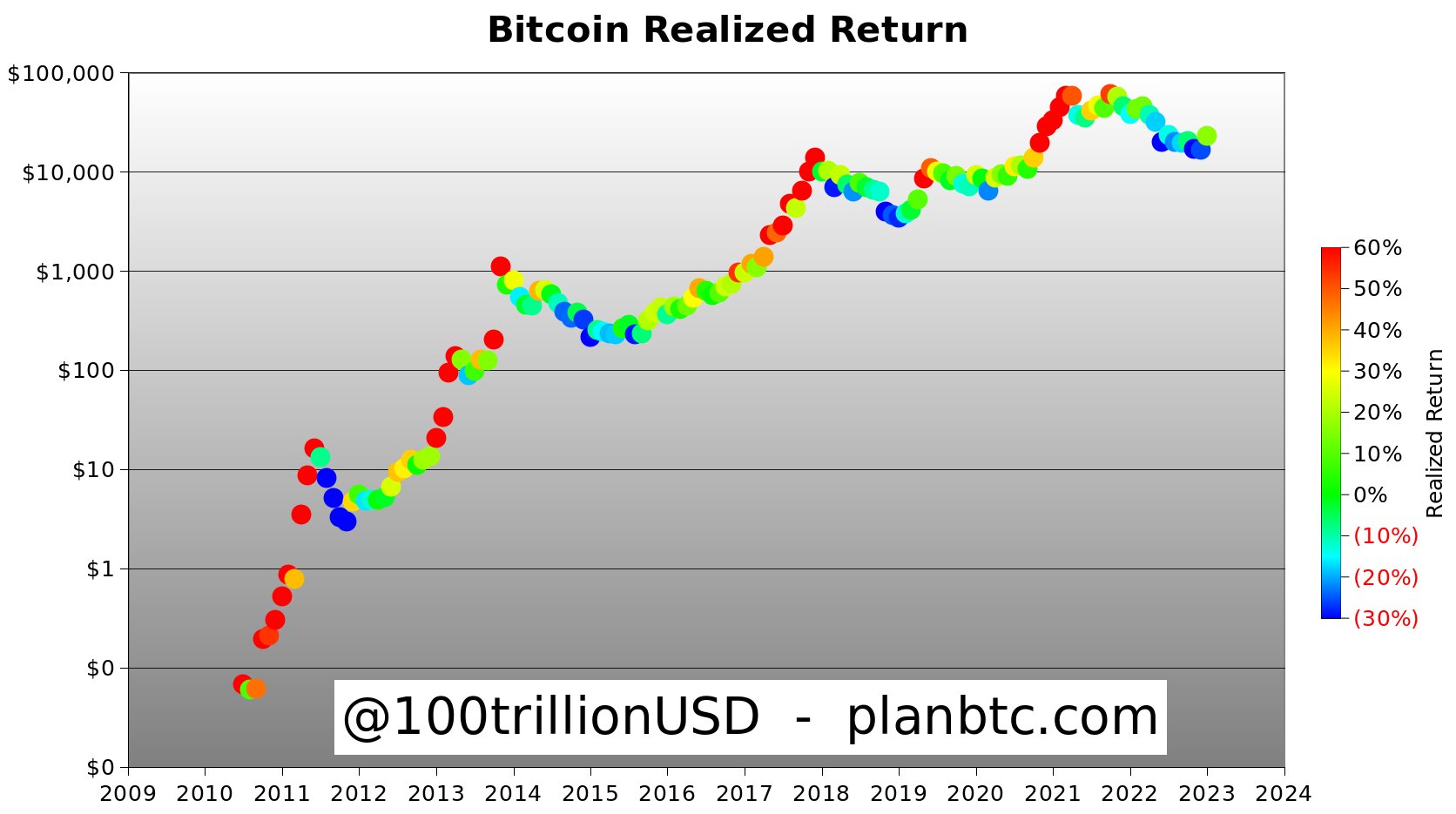 The state of Solana: will the layer-1 protocol rise again in 2023?

Despite the latest FTX-related crisis, Solana still has what it takes to win the layer-1 race, according to the head of strategy at the Solana Foundation, Austin Federa.

Litecoin (LTC) has rebounded by 130% to almost $100 after bottoming out near $40.50 in June 2022. The primary reasons include broadly improving risk-on sentiment and euphoria around Litecoin’s upcoming halving in August 2023.

However, technicals suggest that LTC may wipe out most of these gains in the coming months.

Litecoin stands to pare its gains mainly due to a giant bear flag on the weekly chart.

A “bear flag” is a bearish continuation pattern that occurs when the price consolidates inside an ascending, parallel channel after undergoing a strong downtrend. It resolves after the price breaks below its lower trendline with a rise in trading volumes.

Litecoin has been painting a similar pattern since early June 2022. Previously, the LTC/USD pair had undergone a 70% price correction from $130 to $40.50. Thus, from the technical perspective, it would resume its downtrend course if its price breaks below the lower trendline. 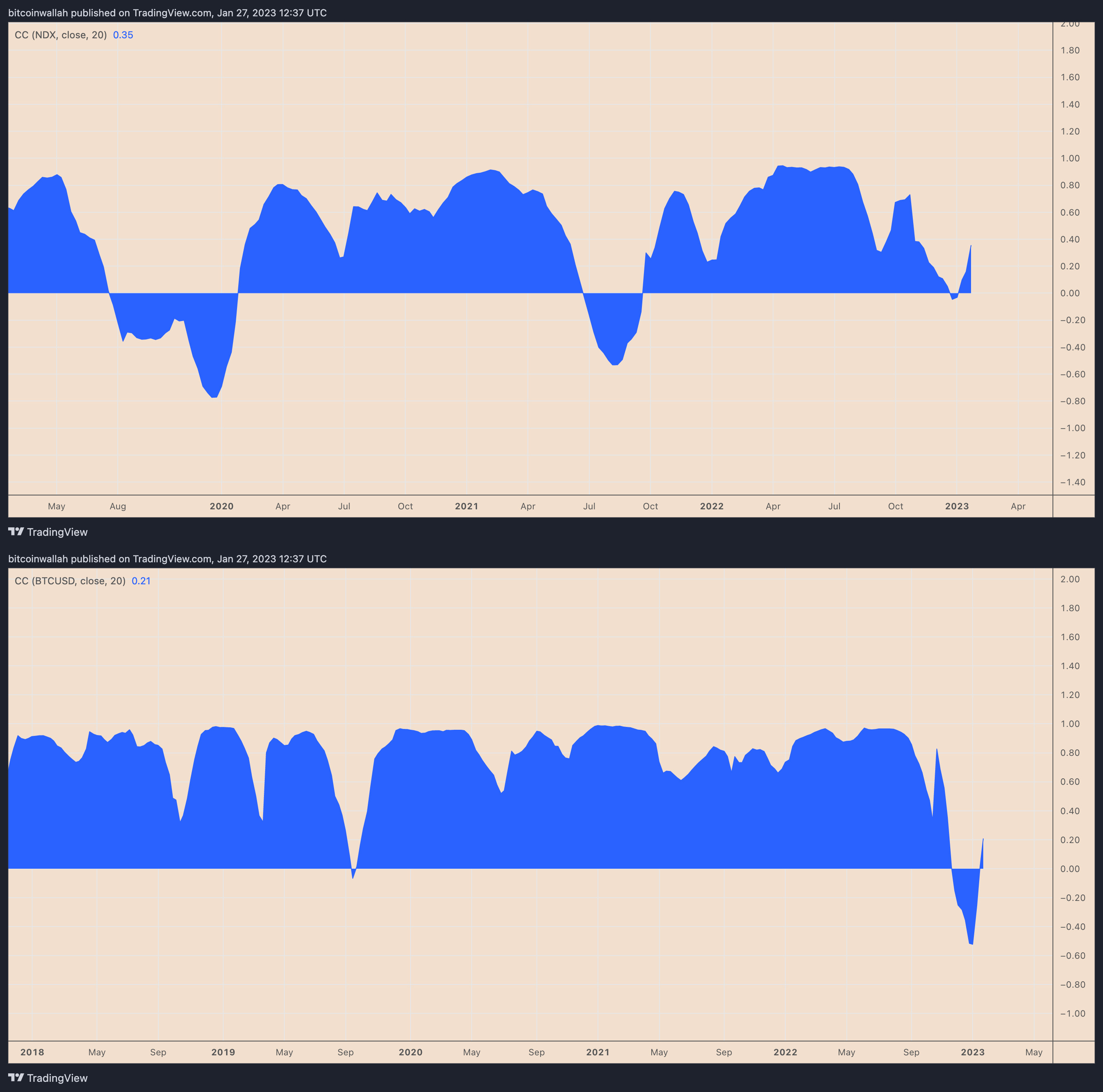 Creating self-sovereignty in the creator economy and Web3 — Is there room for both?

NFT Steez sits down with Web3 advocate Julie Plavnik to discuss the concepts of self-sovereignty and digital identity in Web3-based creator economies.

What is an ascending triangle pattern and how to trade it?

Market analysts rely on many technical indicators to anticipate future trends, one of which is the very-popular ascending triangle chart pattern.

What is an ascending triangle pattern?

As the name indicates, an ascending triangle on a chart forms when the price consolidates between a rising trendline support and a horizontal trendline resistance.

The pattern typically appears during persistent uptrends or downtrends. Most technical analysts see it as a “continuation pattern,” meaning the general market trend is likely to resume.

For example, the Bitcoin (BTC) price chart above shows the BTC/USD trading pair forming an ascending triangle pattern between April 2020 and July 2020.

The BTC price breaks out of the triangle range in late July to the upside. It returns to retest the pattern’s resistance trendline as support in September for further bullish confirmation, resuming its uptrend.

The regulator has been probing registered investment advisors over how they've been offering crypto custody to their clients, according to sources.

The UK financial watchdog has received 300 crypto firm registration applications but has approved only 41 applicants.

Our weekly roundup of news from East Asia curates the industry’s most important developments. Bithumb in turmoil  On Jan. 25, Yonhap Infomax reported that South Korean authorities had requested an arrest warrant for Kang Jong-Hyun, chairman and owner of cryptocurrency exchange Bithumb, over embezzlement allegations. That same day, the Financial Investigation Second Division of the […]

Our weekly roundup of news from East Asia curates the industry’s most important developments.

Authorities said that Kang played a key role in manipulating the stock prices of Bithumb affiliates Inbiogen and Bucket Studio through the issuance of convertible bonds.

Bithumb is one of the largest cryptocurrency exchanges in South Korea. Its previous chairman, Lee Jung-Hoon, was found not guilty last month of a $70 million fraud charge related to his activities at Bithumb. Park Mo, Bithumb’s former largest shareholder, died on Dec. 30 while under investigation for allegedly embezzling funds from Bithumb and related companies. The firm is also currently probed by the National Tax Service over tax compliance incidents.

In its annual report released on Jan. 19, cryptocurrency exchange Binance revealed that the firm received more than 47,000 law enforcement inquiries throughout the year. The exchange said such requests were processed “at a record time” and that it was the first among blockchain firms to join the National Cyber-Forensics and Training Alliance, a nonprofit cybercrime fighting unit based in Pittsburg.

Bitcoin (BTC) price had a mixed reaction on Jan. 25 after the United States reported a 2.9% gross domestic product growth in the fourth quarter, slightly better than expected. Still, the sum of all goods and services commercialized between October and December grew less than 3.2% from the previous quarter.

Albeit somewhat optimistic, another data set limiting investors' confidence was news that the U.S. Federal Reserve (FED) would revert its contractive measures anytime soon as U.S. durable goods orders jumped 5.6% in December. The indicator came in much higher than anticipated, so it could potentially mean that interest rates could be increased for a little longer than expected.

Oil prices are also still a focus for investors, with crude WTI approaching its highest level since mid-September, currently trading at $81.50. The underlying reason is the escalation of the Russia-Ukraine conflict after the U.S. and Germany decided on Dec. 25 to send battle tanks to Ukraine.

The United States dollar index (DXY), a measure of the dollar's strength against a basket of top foreign currencies, sustained 102, near its lowest levels in eight months. This signals low confidence in the U.S. Federal Reserve's ability to curb inflation without causing a significant recession.

Regulatory uncertainty could also have been vital in limiting Bitcoin's upside. De Nederlandsche Bank, the Dutch central Bank, fined cryptocurrency exchange Coinbase $3.6 million due to non-compliance with local regulations for financial service providers — the news was released on Jan. 26. 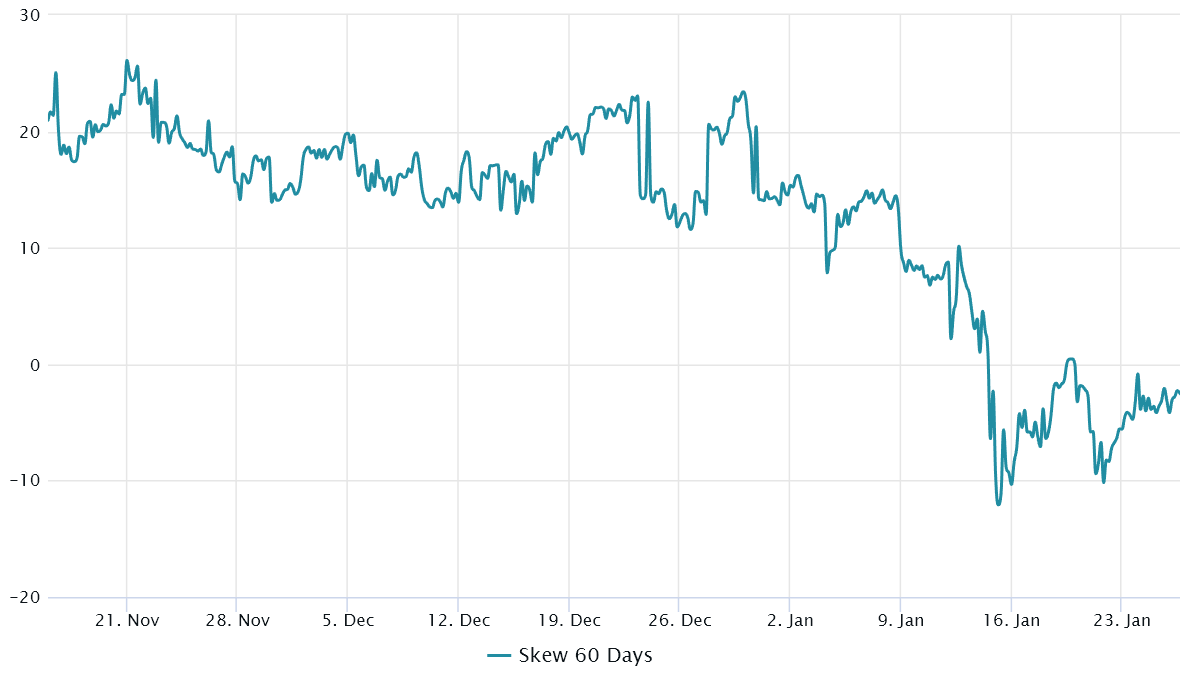 For much of 2022, the crypto market focused on the United States Federal Reserve’s actions. The central bank created a bearish environment for risk-on assets like stocks and cryptocurrencies by increasing the interest rates on borrowing.

Toward the end of 2022, positive economic data, healthy employment numbers and a decreasing inflation rate provided hope that a much-awaited slowdown in the rate of interest rate hikes would occur. Currently, the market expects that rate hikes will reduce from 50 basis points (bps) to 25 bps before the complete end of the hiking regime by mid-2023.

From the perspective of the Fed’s goal of constraining liquidity and providing headwinds to an overheated economy and stock market, things are starting to improve. It appears that the Fed’s plan of a soft-landing by quantitative tightening to curb inflation without throwing the economy into a deep recession might be working. The recent rally in stock markets and Bitcoin can be attributed to the market's trust in the above narrative.

However, another essential American agency, the U.S. Treasury, poses significant risks to the global economy. While the Fed has been draining liquidity from the markets, the Treasury provided a countermeasure by draining its cash balance and negating some of the Fed's efforts. This situation may be coming to an end.

It invokes risks of constrained liquidity conditions with the possibility of an adverse economic shock. For this reason, analysts warn that the second half of 2023 may see excess volatility.

Persistent worries about Binance’s solvency, increased regulation of the crypto sector and questionable use cases are chipping away at BUSD’s market capitalization.

On Jan. 26, the total market capitalization for stablecoins like Tether (USDT), USD Coin (USDC), Binance USD (BUSD) and Dai (DAI) is over $131 billion.

Stablecoins are so crucial to the future of crypto that Moody’s, a well-respected analytics agency, is planning to develop a scoring system, which may help reduce the speculation and fear that some investors have with stablecoins.

Such fear amid a lack of stablecoin transparency has led one of the top stablecoins, BUSD, to see a major usage decline in recent weeks.

Developers of the nonfungible tokens had halted minting on Jan. 25 in response to user complaints.

Following a failed short attack, DeFi exploiter Avraham Eisenberg was liquidated from Aave at a loss of $10 million.