Access real-time blockchain and cryptocurrency news updates from around the globe.

After the impressive rally in January, Bitcoin (BTC) seems to be taking a breather in February. This is a positive sign because vertical rallies are rarely sustainable. A minor dip could shake out the nervous longs and provide an opportunity for long-term investors to add to their positions.

The opinion remains divided, however, on whether Bitcoin has bottomed out or not. Some analysts expect the rally to reverse direction and nosedive below the November low while others believe the markets will continue to move up and frustrate the traders who are waiting to buy at lower levels.

In an interview with Cointelegraph, Morgan Creek Capital Management founder and CEO Mark Yusko said “the crypto summer” could begin as early as the second quarter of this year.

He expects risk assets to turn bullish if the United States Federal Reserve signals that it will slow down or pause interest rate hikes. Another potential bullish catalyst for Bitcoin is the block reward halving in 2024.

Could the altcoins continue their up-move while Bitcoin consolidates in the near term? Let’s study the charts of Bitcoin and select altcoins that may outperform in the next few days. 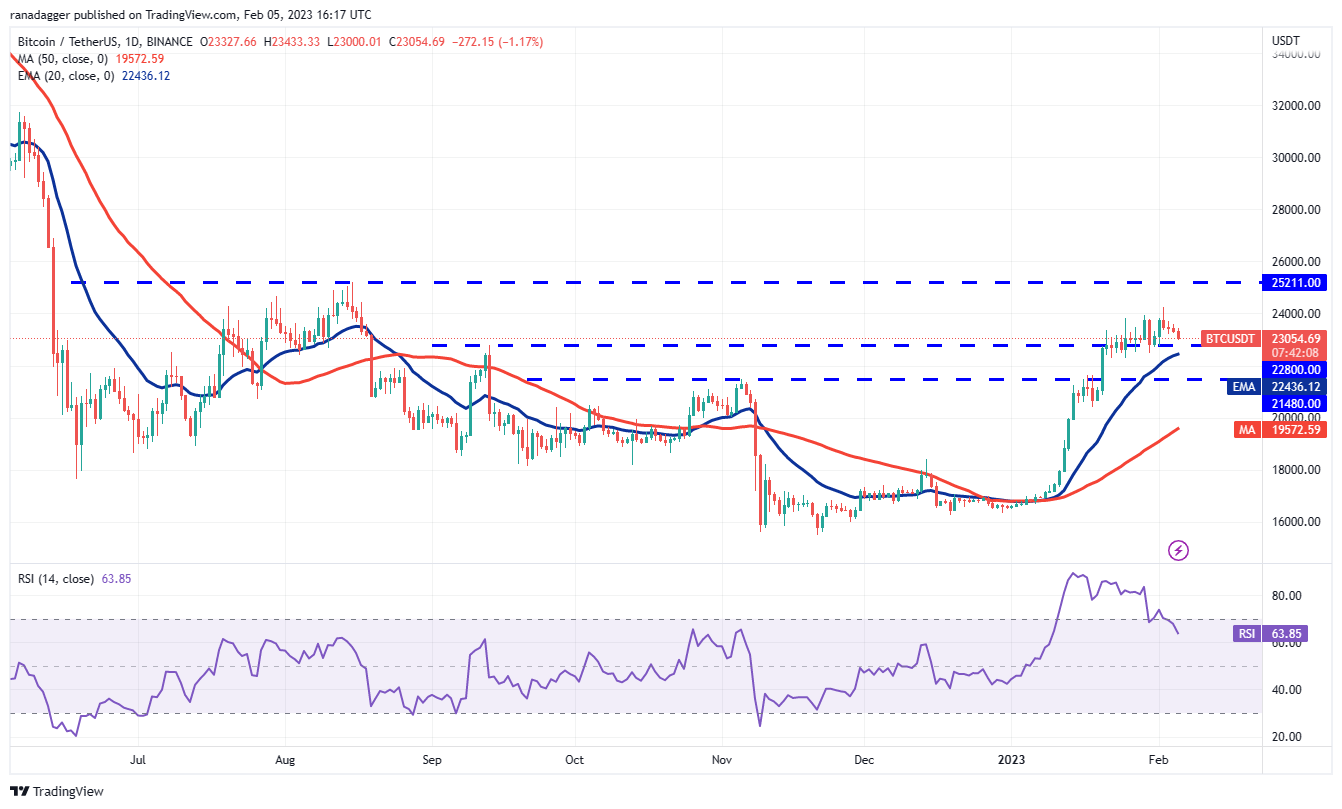 The Global Financial Crisis was a widespread economic downturn that began in 2008 and resulted from the collapse of the housing market and investment banks.

The prover is the crucial engine Starkware uses to roll up hundreds of thousands of transactions and compress them into a tiny cryptographic proof written on the Ethereum blockchain.

Bitcoin (BTC) could face a retest of $20,000 and the United States will fail in its plans for a “soft landing” on inflation, a new analysis says.

In a YouTube update on Feb. 5, Cointelegraph contributor Michaël van de Poppe, founder and CEO of trading firm Eight, warned that the tide is due to turn for risk assets.

Amid confusion over how incoming U.S. macroeconomic data may affect market sentiment, Van de Poppe says there is an increasing chance that the rebound seen in crypto and stocks this year may flip bearish.

Bitcoin, for example, saw 40% gains in January, but like some others, he believes that a disappointing February is a real possibility.

“I think that people should understand that there is no soft landing, that there is likely a continuation of this downward trend on the markets,” he said about the longer-term status quo. 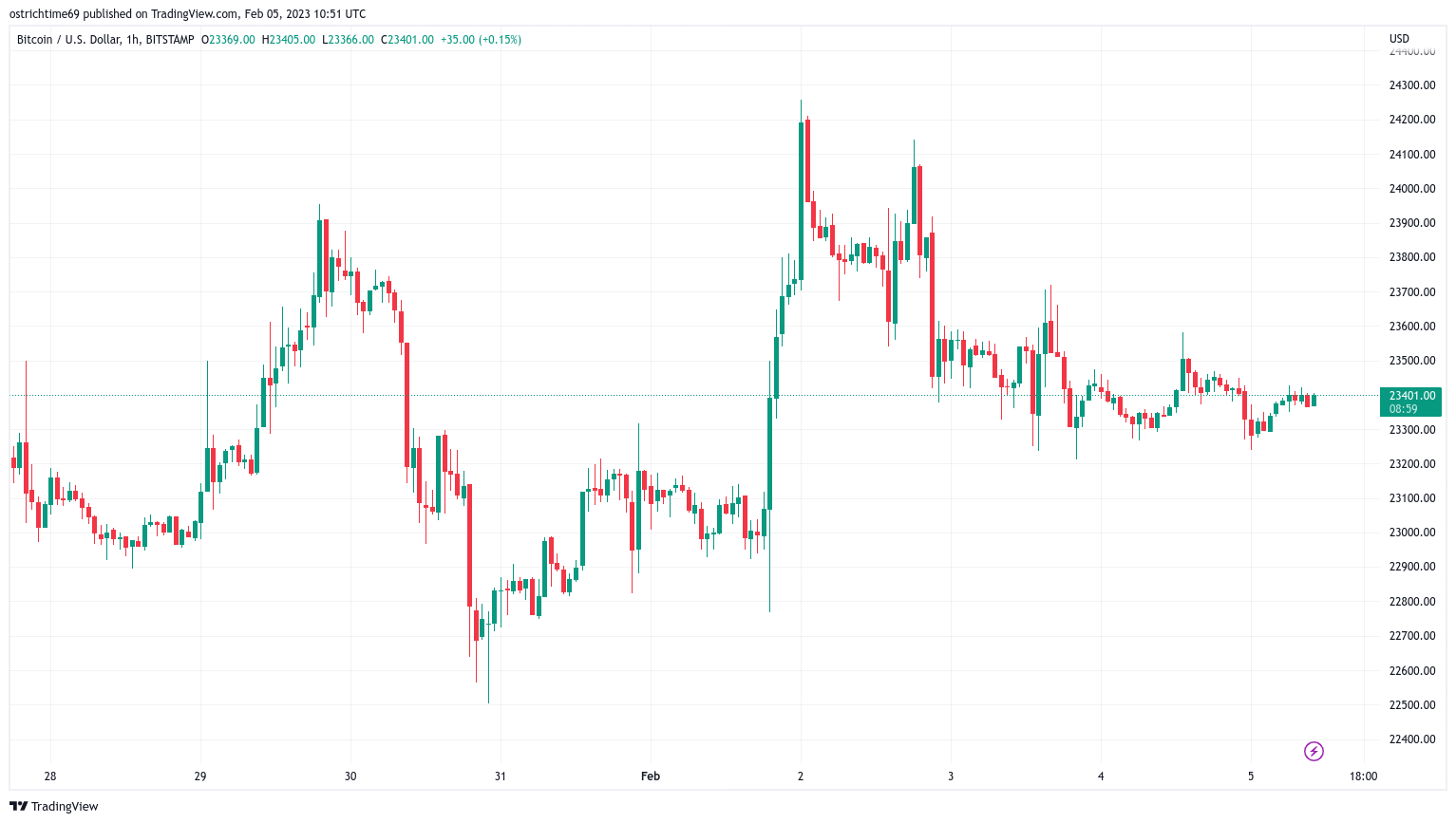 The price of Fantom (FTM) risks pulling back in February due to a growing divergence between its price and momentum in recent weeks.

FTM’s price has grown by 230% in the past five weeks, trading at $0.61 on Feb. 5. The rally came as a part of a broader crypto market recovery but outperformed most top-ranking crypto assets due to the hype created by Andre Cronje.

Cronje is the co-founder and architect of Fantom’s layer-1 blockchain. On Dec. 26, 2022, the developer released a letter discussing the goals and priorities for the Fantom ecosystem in 2023, including his intention to allow decentralized app developers to earn 15% of the network’s revenue.

The FTM price has seen five weeks of gains in a row since Cronje’s letter to the Fantom Foundation team.

The FTM/USD pair looks ready to close the week ending Feb. 5 with at least a 25% profit, helped by Cronje’s latest Twitter thread that gives 13 reasons why Fantom will be one of the best layer-1 blockchains in 2023.

The Shiba Inu (SHIB) price was at the lowest versus its top rival, Dogecoin (DOGE), in November 2022. Three months later, the dynamics have flipped.

The sharp recovery came as investors’ focus shifted to the impending launch of Shibarium, a Shiba Inu-backed layer-2 blockchain built on the Ethereum mainnet, announced on Jan. 16.

As Cointelegraph reported, the SHIB price rebound gained momentum amid reports that Shibarium will go live on Feb. 14.

SBF’s $250M bail guarantors should be made public, rules judge

The identities of two individuals who helped former FTX CEO Sam Bankman-Fried with his $250 million bail bond could be revealed next month following a recent ruling by United States District Judge Lewis Kaplan. Bankman-Fried’s legal counsel has until Feb. 7 to contest the decision. As bankruptcy proceedings continue, FTX and affected parties have requested subpoenas for information and documents from close relatives of Bankman-Fried, claiming not all members of his inner circle have responded to requests for information. Other recent news includes Alameda Research suing bankrupt crypto lender Voyager Digital in an attempt to claw back $445.8 million in loan repayments made before FTX collapsed.

The United Kingdom’s HM Treasury published a long-anticipated consultation paper for its upcoming crypto regulation. The document covers a broad range of topics, from algorithmic stablecoins to nonfungible tokens to initial coin offerings. The authority aims to level the playing field between crypto and traditional finance by incorporating digital assets into the U.K.’s Financial Services and Markets Act 2000.

Zooko’s Triangle: The Human-Readable Paradox at the Heart of Crypto Adoption

Play2Earn: How Blockchain Can Power a Paradigm Shift in Building Game Economies 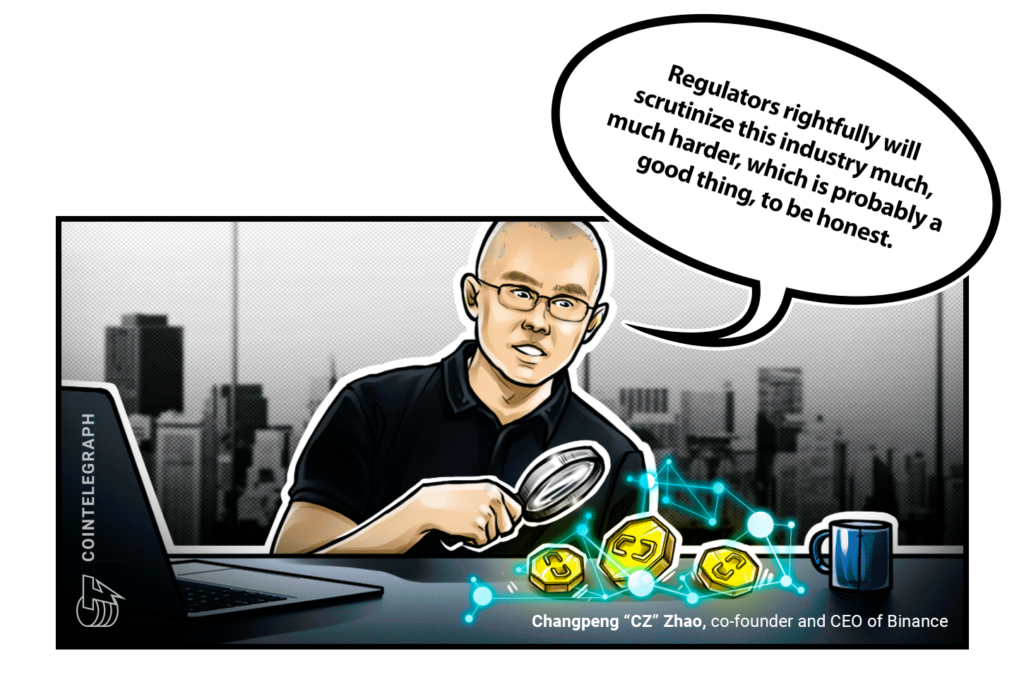 Top Stories This Week SBF’s $250M bail guarantors should be made public, rules judge The identities of two individuals who helped former FTX CEO Sam Bankman-Fried with his $250 million bail bond could be revealed next month following a recent ruling by United States District Judge Lewis Kaplan. Bankman-Fried’s legal counsel has until Feb. 7 […]

Bitcoin (BTC) circled $23,500 on Feb. 4 as bulls refused to give up support in out-of-hours trading.

Macroeconomic data releases from the United States provided modest volatility but no overall trend change as traders bided their time heading into the weekend.

Opinions on the longer-term outlook were mixed, however, with some maintaining that there was little reason to trust that Bitcoin’s rally would continue.

“Seeing $50,000 calls already on Bitcoin and we have yet to complete a higher high and higher low market structure change,” popular trader Crypto Tony summarized in part of a tweet on the day. 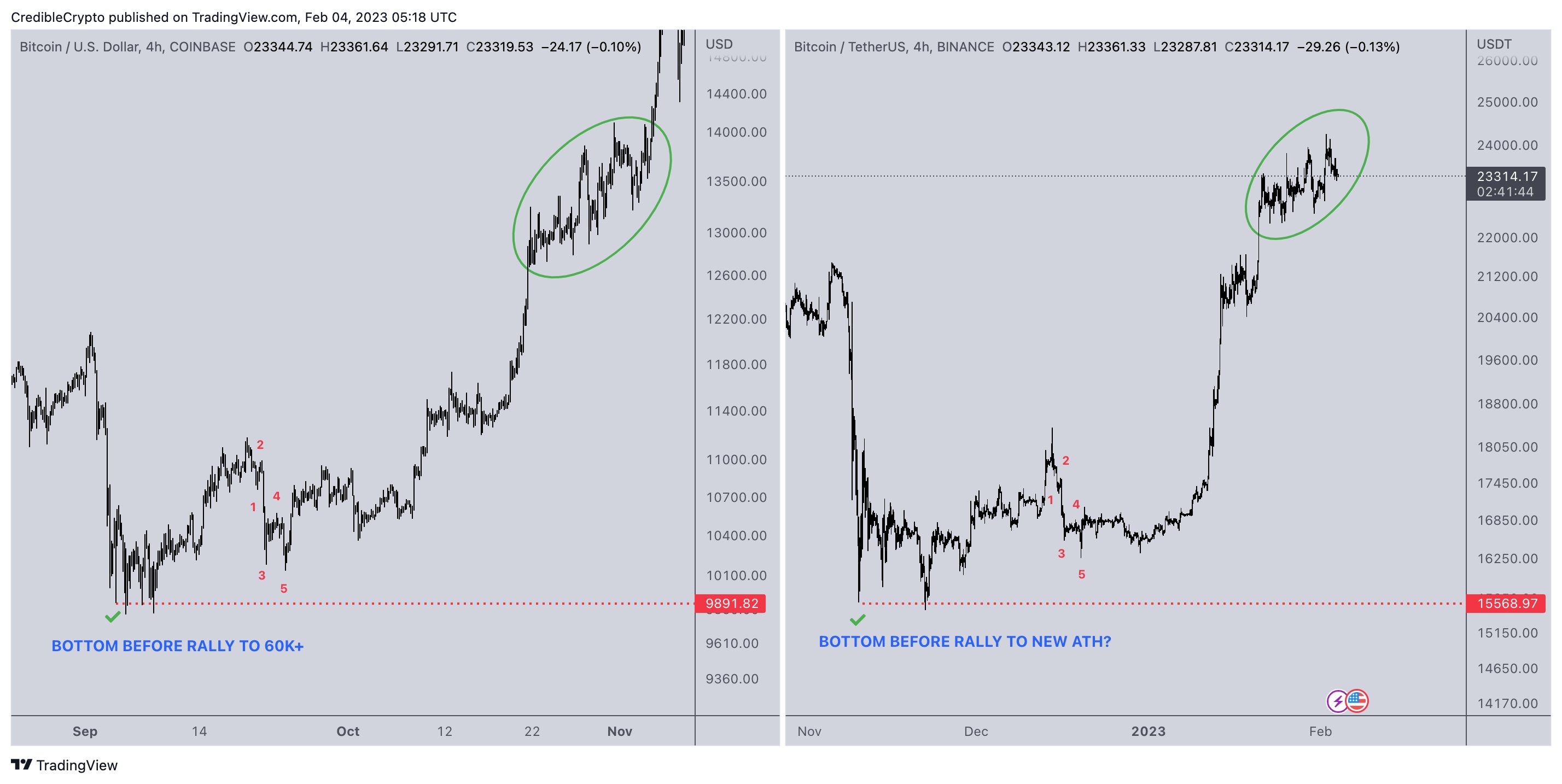 Nirmala Sitharaman hopes that finance ministers and central bank governors will be able to agree on crypto regulations in the G-20 meeting in Bengaluru later this month.

Crypto execs suggested that the "extremely challenging" times forced them to cut jobs in order to “weather this extended" crypto winter.

Observers can learn a few things from the failed effort by IBM and Moller-Maersk to develop TradeLens, a blockchain-enabled global trading platform.

ATOM gained 50% in January and while the wider crypto market could remain bullish for some time, does the Cosmos ecosystem have strong enough fundamentals to support further upside?

Bitcoin's bull market is likely to start earlier than expected due to anticipation of the BTC halving and favorable macroeconomic conditions, according to Mark Yusko, founder and CEO of Morgan Creek Capital Management.

Data from Cointelegraph Markets Pro and TradingView followed BTC/USD as it erased gains from earlier in the day to center on $23,000 support.

The pair reacted negatively to U.S. unemployment data for January, which beat expectations so considerably that overall jobless figures fell to their lowest since 1969. 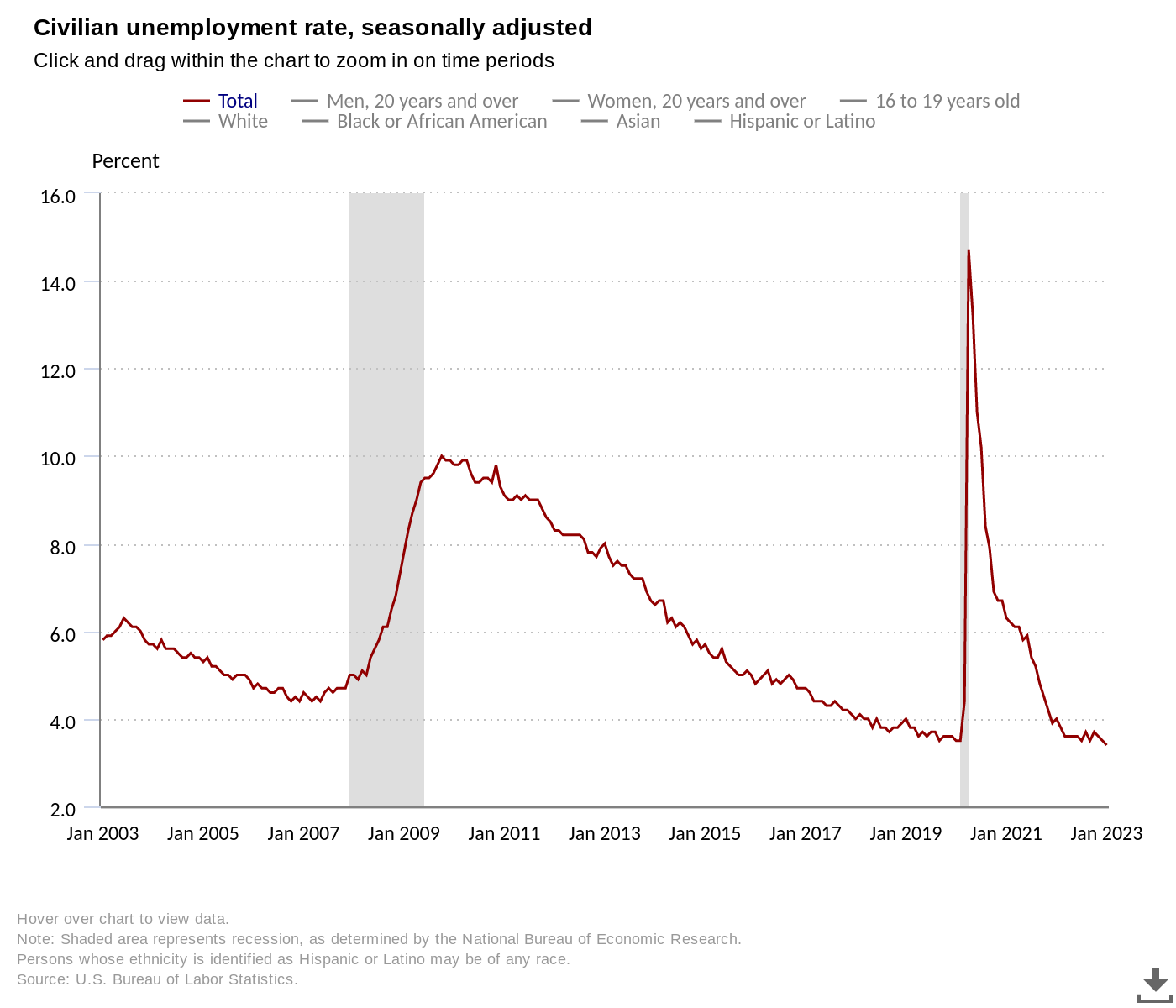 Why did Bitcoin price go down today? BTC traders brace for $23K retest

Bitcoin (BTC) headed toward $23,000 on Feb. 3 after a night of losses erased bulls’ latest progress.

The pair had come off a second trip above the $24,000 mark at the Feb. 2 Wall Street open, with buyers failing to sustain momentum amid macro market volatility.

In classic style for interest rate announcements by the United States Federal Reserve, an initial move was soon countered, with Bitcoin returning to its prior position.

Conditions worsened thanks to a rebound in U.S. dollar strength, with the U.S. dollar index (DXY) putting in a conspicuous bounce, which it began to consolidate on the day. 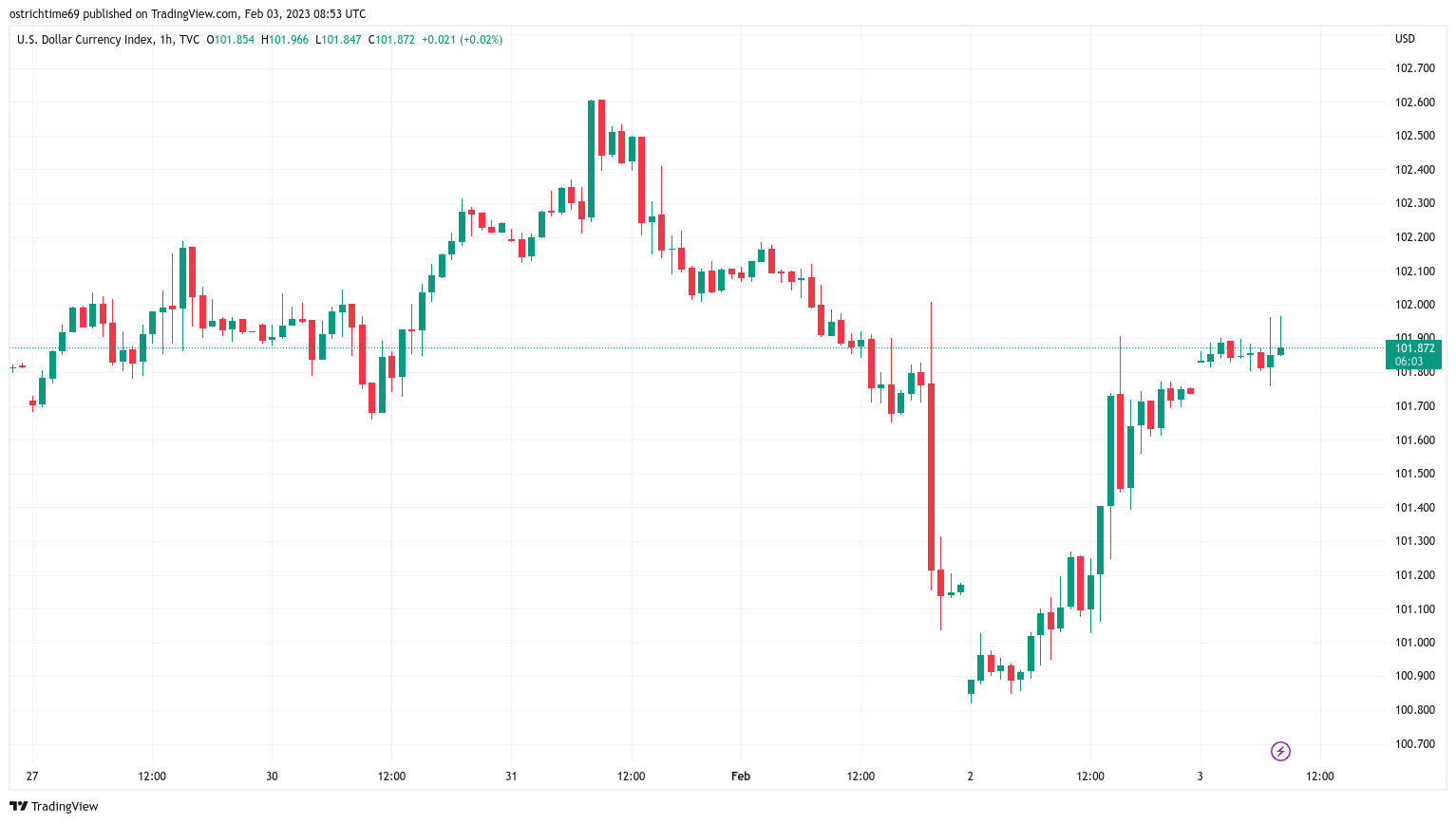 The new measures from the Australian government come as cryptocurrency scams skyrocketed 162% to $221 million in 2022.

OpenSea serves as an example of why crypto security must improve

For cryptocurrency to achieve mass adoption, breaches that can be easily prevented — like the phishing attack that resulted in OpenSea losing $1.7 million — need to end.