Bitcoin miners’ worst days may have passed, but a few key hurdles remain

Bitcoin’s mining industry has been relatively stable compared to the bearish price action and the tumultuous fallout of exchanges and lending companies.

The network’s hashrate dipped slightly toward the end of 2022, primarily due to an unprecedented blizzard in the U.S., and has since recovered strongly to surpass its previous peak above 270 EH/s. It was particularly encouraging to see that the hashrate holding well above summer 2022 lows, despite the aftermath of FTX collapse. 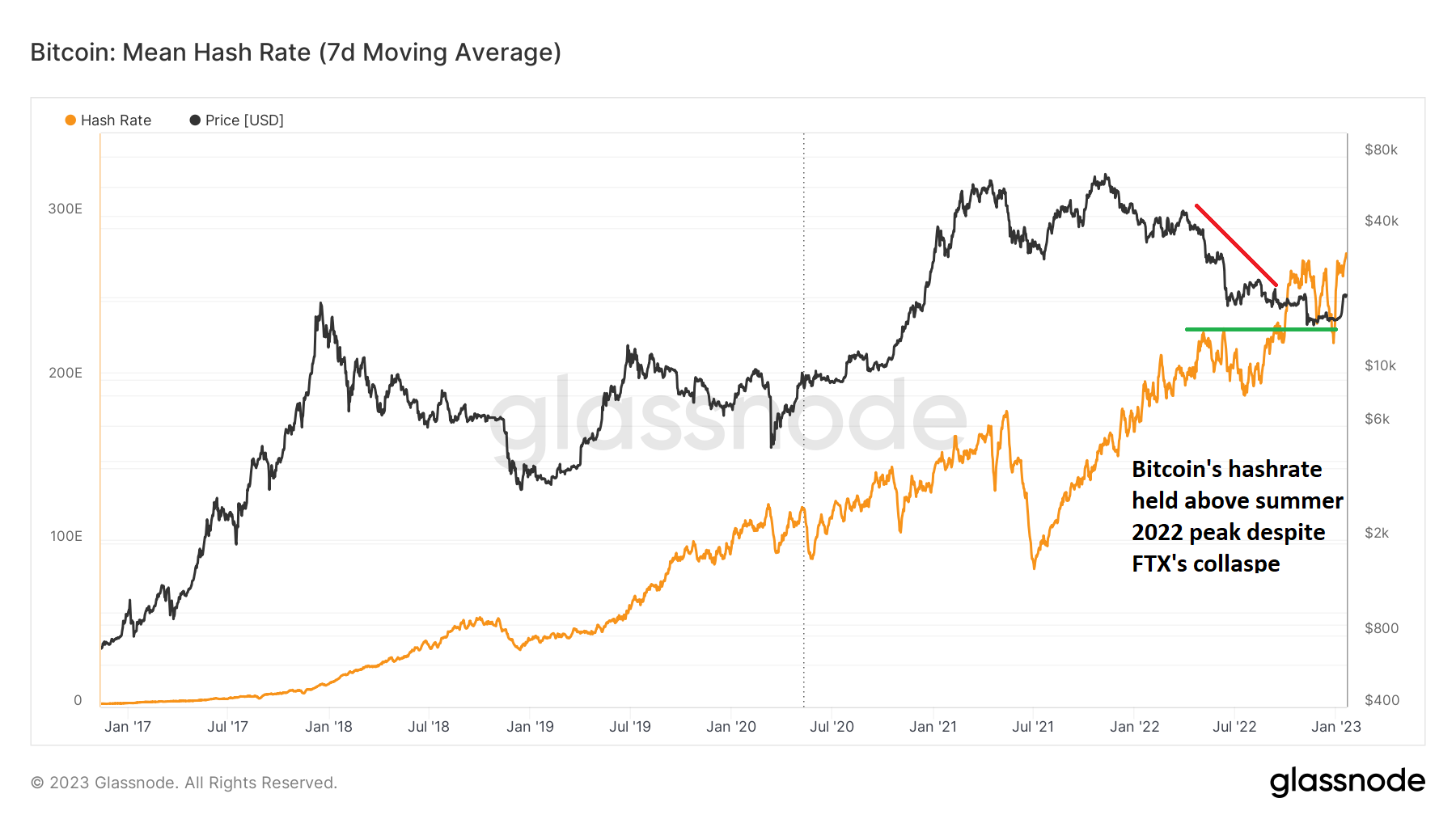 However, despite the recent robustness in a variety of metrics, the mining industry faces many challenges, which will likely restrict its growth moving forward. The hurdles include low profitability, a threat from new-age efficient machines and the upcoming Bitcoin halving which will slash block rewards by half.

While the hashrate of Bitcoin's network has improved, miners are still under a lot of stress due to low profitability. The earnings of Bitcoin miners have shrunk to one-third their value from the peak. Before the May 2022 price collapse, miners made more than $0.22 daily per TH/s, a figure which has now dropped to $0.07.

The percentage share of small-sized miners with breakeven prices above $25,000 has dropped from 80% in 2019 to 2% by 2022, which is a positive sign of an end to miner capitulation.

The sustainability of mid-sized miners with breakeven prices between $20,000 and $25,000 depends on the capital efficiency of participants. The struggle for them is to survive until the bullish trend commences, hoping to benefit from the next bullish cycle.

The significant drop in prices of mid-sized machines suggests that their demand has slowed down. According to CoinShares, reducing machine prices will allow capital-rich entities to "reduce their capital expense cost per TH/s and increase output without incurring additional ongoing cash-costs" by buying hardware at a cheap rate. However, this will come at the expense of existing miners, which will likely restrict the industry's growth as a whole. 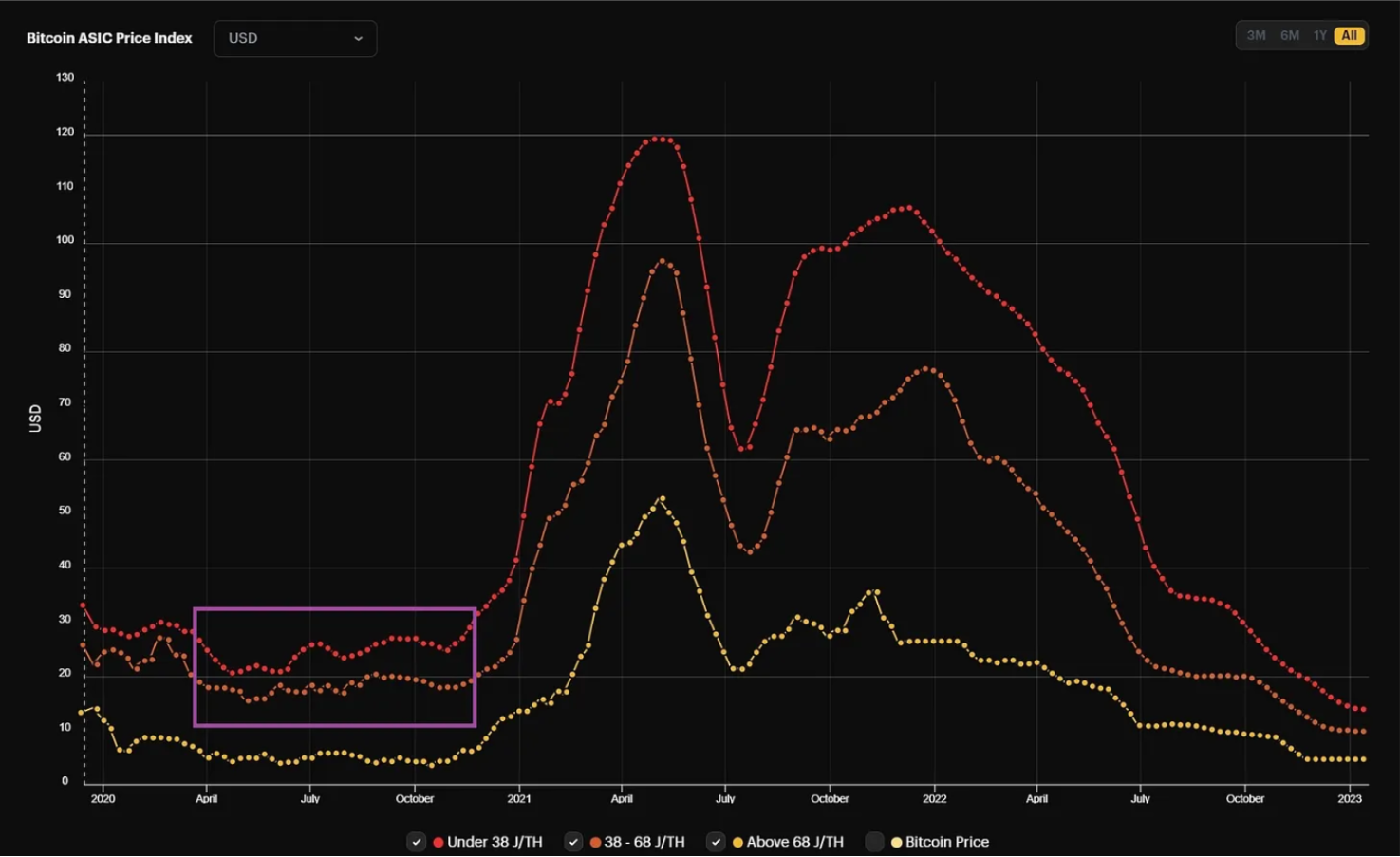 Moreover, the firms with weak financials will also not be able to take advantage of the slowdown by raising debt, especially as central banks globally are hiking borrowing interest rates.

Independent research firm, The Bitcoin Mining Block Post, arrived at a similar conclusion about the industry’s growth in 2023. Their analysts predict that the cost of miners “will move sideways and gradually trend upwards” as it did in 2020.

Pressure from more capable ASICs and the upcoming BTC halving

The existing Bitcoin mining industry also faces significant challenges from the arrival of new and efficient machines and reduced rewards after halving in 2024.

Since June 2021, more energy-efficient miners have arrived, offering more than 100TH/s per joule. This trend accelerated by Q2 2022 with the launch of new hardware equipment that had more than twice the efficiency of existing miners at the time. The breakeven prices of some of these miners are below $15,000. 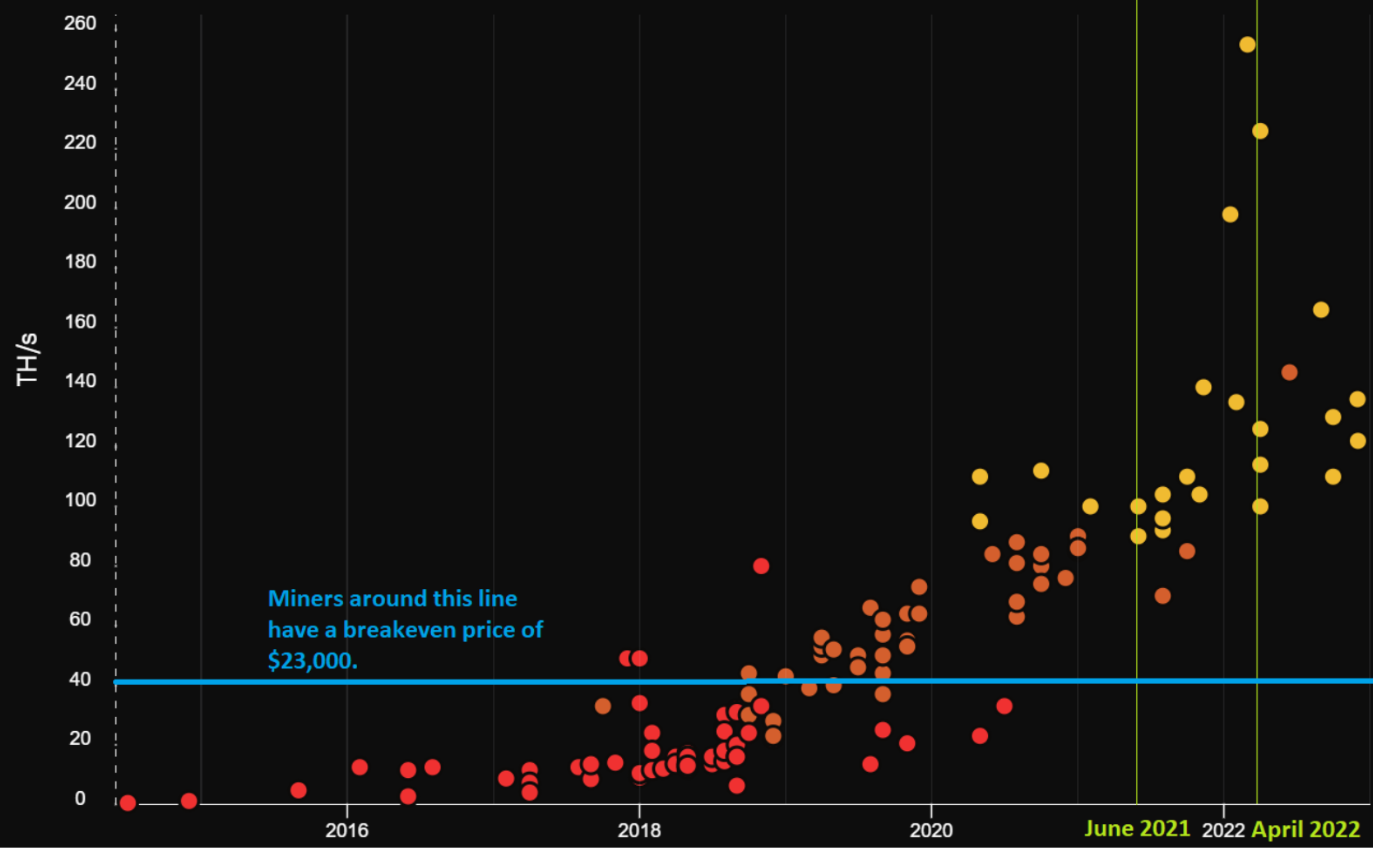 The launch dates of miners with their power ratings. Source: Hashrate Index

The increase in efficiency will likely flatten out for the next couple of years due to the limitations of the microprocessor chip size. The most efficient miner produced by Bitmain, the S19 XP, has a 5 nm chip. Going below this size significantly increases the cost and risk of production errors.

Still, as more of these types of equipment flood the market, the mining difficulty for existing players will increase and slowly drive them out. Thus, only competitive miners who can successfully expand and sustain operations will survive this phase.

On top of that, the miners will also have to prepare for the March 2024 halving event. CoinShares research pointed out that, given how halving will directly impact the miners, “a potential strategy by mining companies may be to focus on reducing operating expenses above their cash-costs (including overhead, debt, hosting, etc.).”

Will miners realize profits in 2023?

The above data suggests that the worst days of miner capitulation could be finished. However, the industry remains under considerable pressure, under which BTC accumulation is challenging.

Miners continue to be prominent sellers in the market. An update from Coinbase Institutional on Jan. 19 cited that, “crypto miners have started to be a bit more aggressive in selling.”

The one-hop supply metric of Bitcoin miners is calculated from the total holdings of addresses that received tokens from mining pools. The indicator recorded a slight uptick in miner balance since the start of 2023. However, the total amount is still below 2019 lows, pointing to the challenges of a swift recovery in conditions unless the price favors miners.

The fact that miners are continuing to sell with little hopes of recovery in the short-term could ruin the hopes of those expecting a parabolic run in 2023. Nevertheless, the good news is that the worst days of capitulation might be behind. While slow and steady, miners can continue to grow, start accumulating again, and help stage the next bullish rally.

This article does not contain investment advice or recommendations. Every investment and trading move involves risk, and readers should conduct their own research when making a decision.

When you subscribe to the blog, we will send you an e-mail when there are new updates on the site so you wouldn't miss them.